Home > Transport decarbonization: a new form of hydrogen storage could be a game-changer

Transport decarbonization: a new form of hydrogen storage could be a game-changer

To limit global warming to +2°C by 2050, it is urgent to identify low-carbon alternatives to fossil fuels, on which the world economy currently depends for more than 80%. Transport is particularly affected since 31% of greenhouse gas emissions in France are due to this sector alone [1]. In this case, the new hydrogen storage solution could be a game-changer.

Transport: transition to hydrogen well along in the pipeline

The objectives are clearly stated: to run 250 hydrogen trains by 2035 for the French rail operator SNCF, to launch the first hydrogen-powered aircrafts at Airbus within the same timeframe, or even to build a partnership with the first hydrogen ship in the world. – Energy Observer – for CMA-CGM. However, hydrogen provides an answer to transport decarbonization only if it is produced from low-carbon energy sources, mainly through the electrolysis of water. Unfortunately, 96% of hydrogen production currently comes from fossil fuels. This kind of hydrogen is called gray hydrogen, and its environmental gain compared to conventional fuel is marginal.

In France, low-carbon hydrogen can be produced via the electrolysis of water from renewable energy sources or nuclear power. Its emission factor can represent 80% less greenhouse gas (GHG) emissions throughout its life cycle compared to gray hydrogen (see Figure 1). For now, low-carbon hydrogen remains an expensive solution, but McKinsey expects its price to fall by 60% by 2030 to just €4 per kg [2] (see Figure 2).

The current high price of low-carbon hydrogen is mainly due to its production and storage costs. Regarding its production, various solutions such as reducing the construction cost of electrolyzers or the cost of electricity were considered by IRENA in a 2020 report [3] (see Figure 3). For storage, its high cost is explained by the nature of hydrogen, which has an energy density three times higher than gasoline or diesel but a very low volume density. To store hydrogen in a reasonable volume, the pressure and/or temperature must be modified. Hydrogen can be stored in three forms: gaseous, liquid or solid. 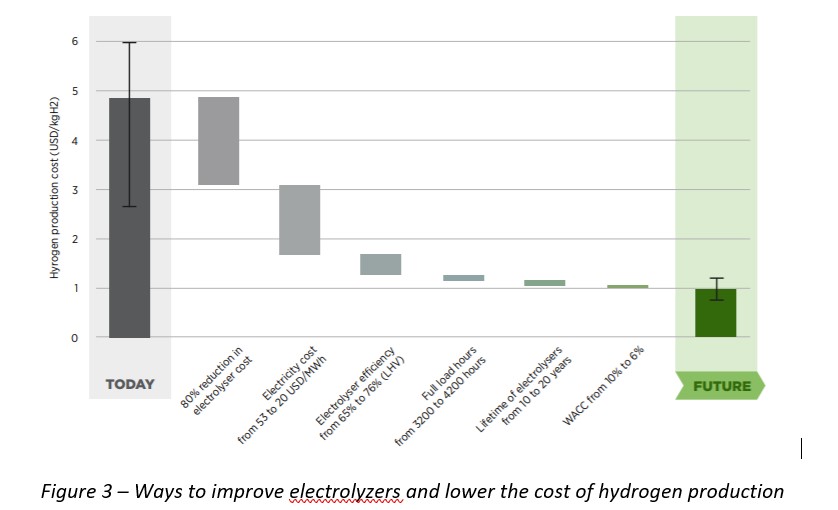 The gaseous form is the only form open to the public. Today, it supplies taxis (Hype in Île de France), trains (like Coradia iLint), trucks (Volvo in Europe, Hydrolux in Quebec), coaches (Safra in Occitanie or Hyzon in Australia), bicycles (Pragma Industries manufactures them in Biarritz) and buses (notably for the town of Les Sables d’Olonne in the Vendée region of France). In its gaseous form, hydrogen is compressed up to 700 bar: thus, 7 L of hydrogen contains as much energy as 1 L of gasoline. The compression mechanism will generate 6 % losses: it will be necessary to produce 1.06 kg of hydrogen to obtain 1 kg at the end of the process.

For the hydrogen to become liquid, the temperature has to be lowered to -252.87°C: in this case, 4 L of liquid hydrogen is equivalent to 1 L of gasoline. Here, due to the cryogenic temperature, evaporative losses can be up to 13 %. This form of hydrogen is currently reserved for the aerospace field as fuel for rockets, but Airbus could use it for its future ZEROe hydrogen plane and Daimler is testing it for its trucks. Hydrogen can also be stored in liquid ammonia at -33.4°C at atmospheric pressure, after being mixed with nitrogen from the air [4].

Developed by the CNRS and taken over by McPhy Energy, solid hydrogen corresponds to metal hydrides, stored in pellets 30 cm in diameter each containing 600 L of hydrogen. This technology has the advantage of operating at ambient temperature and at low pressures. In addition, its loss rate is only 3% and its volume density is higher than in the gaseous and liquid forms: 106 kg/m3 versus 70 kg/m3 in liquid form and 42 kg/m3 in gaseous form compressed to 700 bar. More recently, a new solid hydrogen storage with boron nitride was discovered by researchers at Deakin University, Australia.

A new form of hydrogen storage, called HydroSil, proposed by Hysilabs, which has taken over development from the University of Aix Marseille, could however reshuffle the cards on the hydrogen market, with a hydrogen volume density of around 87 kg/m3 [5]. A liquid vector, silicon hydride, will be chemically charged with hydrogen: 8.7 kg of hydrogen will be stored in 100 kg of the liquid vector, i.e. 8.7% of hydrogen storage capacity. This charging process will make it possible to store seven times more hydrogen than in the case of gaseous hydrogen compressed to 200 bar. Then, the hydrogen can be released in 10 s in a carburetor by a chemical reaction of catalytic hydrolysis, without the need for any external energy. This hydrogen storage solution could first be used in stationary appliances and then, eventually, for transport.

Unlike the other forms, there would be no need for special infrastructures to transport and store hydrogen: the existing conventional infrastructures for oil products could be used, with minimal modifications. The transport of this type of hydrogen would have greenhouse gas emissions up to 40% lower and cost savings of 30% compared to conventional solutions.

In conclusion, according to Pierre-Emmanuel Casanova, Chloé Avetand and Lisa Raoux of HysiLabs, HydroSil is infinitely recyclable, non-toxic, non-flammable, stable, liquid, without any loss of hydrogen, economically competitive and could use current conventional infrastructures. It therefore has, on paper, all the advantages to become the main hydrogen storage technology.

By 2030, Hysilabs projects that its hydrogen charging and release facilities will have a capacity of 200 kt/year. However, France Hydrogène predicts that in 2030, hydrogen consumption in France will be 680 kt according to the Ambition 2030 scenario and even 1090 kt according to the Ambition+ 2030 scenario [6]. So Hysilabs would only absorb 18 to 30% of the hydrogen market in France if the company meets its growth objectives. It thus seems that the other forms of hydrogen (gaseous, liquid, solid, ammonia) will still have a role to play in the coming years. 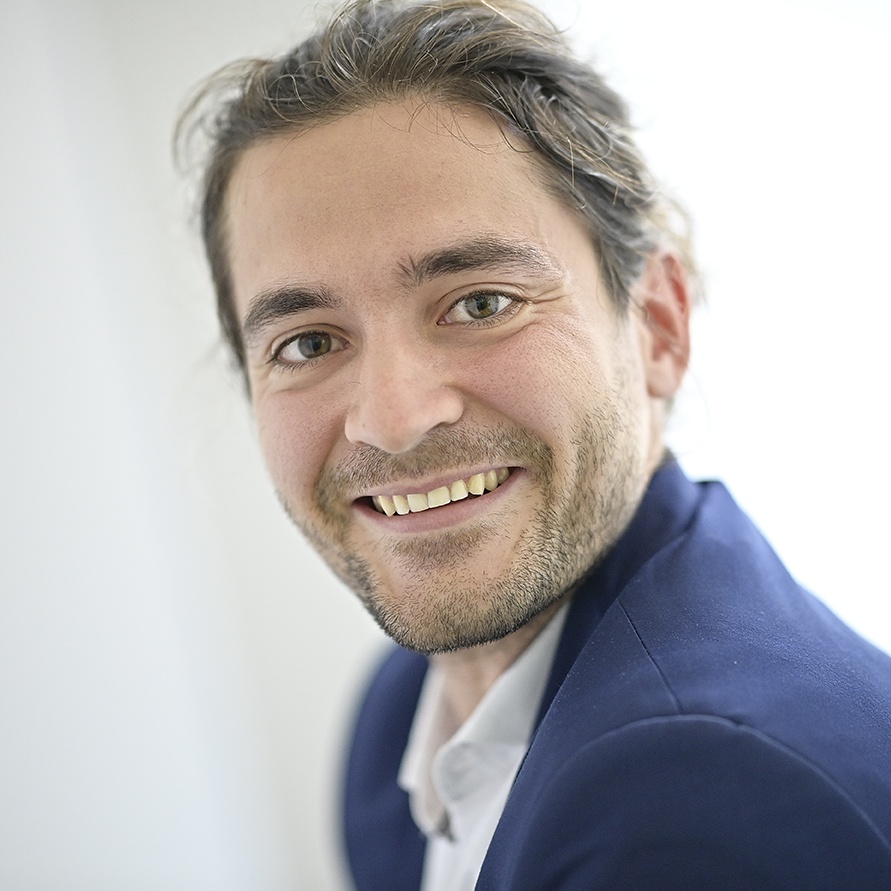